Even before we told the kids that BabyBoss3 was on his/her way, George had a fascination with babies. He pointed them out at daycare or in the store. He stole his sister’s dollies. He talked about them every time he saw one on TV.

Do you think we should get George his own doll?

Aaron didn’t see why not. McKenna has a Bitty Baby bought as tradition for one of her first Christmases. Should we spend that much on a doll for George? I mean, if he was going to play with it, why not? But then a friend offered us an older well-loved Bitty Baby and we just bought it some premie size clothes.

It sat in the corner for months.

Then one day George found it and it was game over. He’s been dragging his doll around with him everywhere he goes. When asked what his baby’s name was, he said Ro Ralph after the movie Wreck It Ralph which was in high rotation at the time. 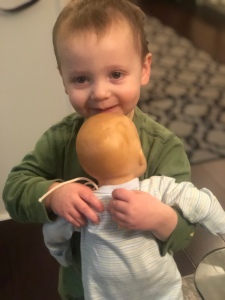 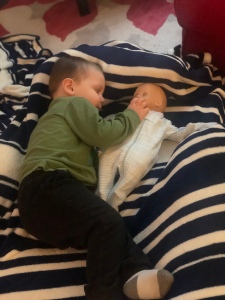 He started putting Ralph in the high chair. He wanted to bring Ralph to the store. He slept with Ralph and they watched TV together. It’s one of the cutest things I’ve ever seen.    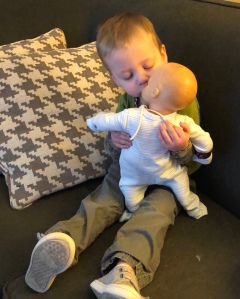 So when we started staying home to do our part to stop the spread of C19 and George started playing with Ralph even more, it was no surprise when Ralph started joining us for our daily walks. McKenna pushed one of her many interchangeable babies in her pink stroller while George dragged carried Ralph. But then he wanted a stroller. Specifically a yellow stroller.

Ever try to find a yellow doll stroller in the middle of a pandemic? Good luck.

All doll strollers seem to be pink. And that’s fine if your child wants a pink stroller. But he very specifically wanted a yellow stroller. Besides, we have a pink one already. So I showed him some shopping carts on my phone. There happened to be the classic yellow and red Little Tike’s shopping cart and he loved it. A couple of clicks and it was scheduled to be delivered in a few days.

This shopping cart has become Ralph’s favorite accessory. It gets parked in George’s room almost nightly while George and Ralph snooze away. It carries oodles of Oranges and water cups and whatever other trinkets and two year old boy wants to haul around. And today when we went on a walk, Ralph was placed in the baby seat for a safe trip around the block. With plenty of social distance between us. 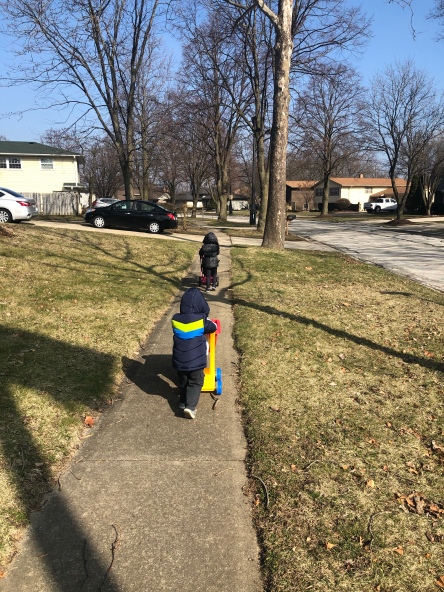 I am writing for the 2020 Slice of Life Challenge.