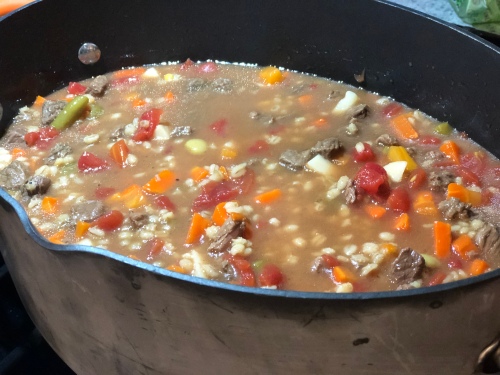 It’s one of those days. Chilly and wet and lazy. When I was making my meal plan mid week, I checked the weather and knew it would be a good day for soup. Which one? I make a few tasty soups that would fit the bill. Then I remembered my aunt had asked me recently for grandma’s vegetable beef barley soup.

Nope. This will always be my mom’s soup.

See. We grew up in Chicago. My dad was a city worker and to keep his job, we needed to live within city limits. At the time the schools were less than par. My parents sacrificed a lot to send us to private schools so we could get a good education. And the women at my school influenced me more than I ever could have imagined as a youngster. I wrote about it last year.

How does soup and catholic school fit together? I’m sure you are wondering.

Because of the six kids in private schools, we didn’t have a lot of expendable cash. A pound or two of meat had to stretch to feed us all. And that included three growing boys and whatever friend was staying for dinner. This soup was a great way to do that. Just a pound and a half of inexpensive beef stew meat and you could have a meal that may even stretch far enough to toss a bowl of leftovers into the fridge. It’s the miracle soup.

I just always assumed it was my mom’s soup and not my grandma’s. It shouldn’t surprise me that is was Gram’s recipe. She had 7 young mouths to feed herself. She was no stranger to stretching a buck.

This soup is so good, I’ve written about it before! Whoops. I didn’t even realize it until I went to go publish. It’s a Karyn in the Kitchen two-for-one.

When we lived with my parents, it became a quick favorite of my husband. It could be tossed together relatively quickly with little hands-on time. The hardest part is cutting the meat into bite-sized pieces. And waiting. As with all good soups, there is a fair amount of waiting. But in the end, it’s always worth it when you dig in with a warm slice of buttered bread.

Add trimmed beef and brown on all sides.

Let simmer on medium-low until beef is tender and broth is deeply flavored (about 30 minutes).

Add ½ a carton broth and the barley.

About 20 minutes before serving add drained mixed vegetables and NOT drained tomatoes.

I am writing for the 2019 March Slice of Life Challenge