She has the most beautiful hair. It’s long and blond and as thick as can be. It’s shiny and healthy. I am completely jealous. I wrote about it last year. You can read about it HERE.

She’s had haircuts over the years but we’ve never cut a lot of it off at one time. A couple of months ago she started talking about wanting to cut it.

She wants it cut to her chin.

She wants it cut to her shoulders.

I’m hesitant. What if she hates it after the first piece is snipped? I would be so sad for her. But I’m afraid that she will find a pair of scissors and cut it herself. She’s just that determined.

We head to Aunt C’s house so she can do it right. I decide that if she is going to cut it off, we will donate it to a good cause. it’s 8-9 inches after all. I’ve read many times that Locks of Love sells their wigs. We cross them off the list. After some research, we decide to donate it to Children With Hair Loss. They are a wonderful organization that will give children a new free wig every year until they turn 21.

She loves her new hair. That’s what she says. Until she realizes that it’s different. She doesn’t like change. When we need to do her hair for school, she is upset because I cannot braid it. She reminds me that we have not mailed her braids yet.

I’ll get the glue stick

My face falls and I’m heartbroken. No matter how many times I told her that it would be a very LONG time until it grew back, she still didn’t get it. It’s too late, now. That first day was very tearful. 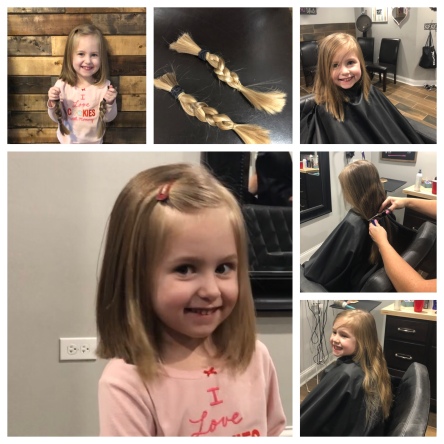 It’s been a few weeks and she’s used to it now. She loves all the bows and barrettes she couldn’t wear before because it wouldn’t hold her hair out of her face. She’s enjoying that it’s easier to wash and brushing it is a breeze. Tangles are non-existent and it no longer falls into her food…or god forbid…the potty. 🤢

She’s told me that she wants to grow it very long again. I’m OK with that. When I told her it may take until she’s 5 years old, she was very surprised. In all honesty, to grow as long as it was, it’ll probably when she’s 6 but I don’t have the heart to tell her. Until then, we will look for more headbands.

I am writing for the 2019 March Slice of Life Challenge

Leave a Reply to Karyn B Cancel reply