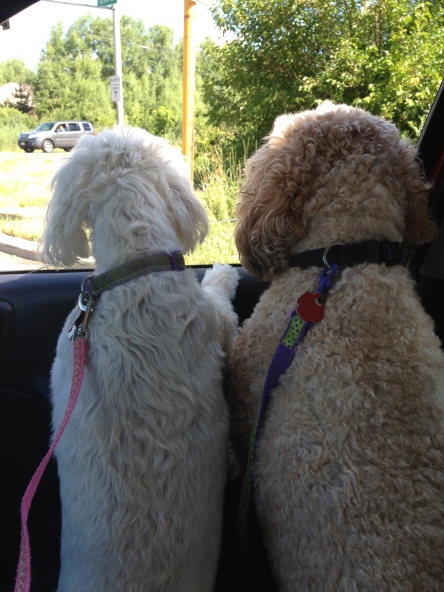 Cooper and Zoë on the way to get haircuts!!

My mom would have found today both infuriating and funny.  Today, Cooper and Zoë were taken to the groomer for their grooming appointment.  Nothing gets those two happier than the word HAIRCUT…except maybe w-a-l-k.  I’m even afraid to type that one for fear they can read.  They will mow me over for a chance to go out on their leashes.  And the car?!  Forget about it.  Those two would love nothing more than a long road trip with the windows down!!

Anyway, while at the groomer I mention that Cooper may need an extra good scrub because he is pretty stinky.  That’s where my mom would laugh.  It’s Cooper’s ONE flaw.  He is ALWAYS stinky.  No matter how often he is bathed that pup is SMELLY.  The groomer thought he might have an ear infection.

While waiting for the pick up, I decided to call the vet to make an appointment thinking it may take a week or two.  Turns out that getting Cooper into the vet is vastly easier than making a sick appointment at my own doctor.  They were able to get him in this afternoon.  Poor Coop doesn’t just have an ear infection.  He’s a hot mess.  The little guy has a double ear infections as well as skin and paw infections.  That’s what’s causing the overall STENCH.  This is where mom would be infuriated!!  It cost $300 for the visit and all the meds!  I’m not kidding…$300!!  This pup needs his ears cleaned every three days along with a bath in some special shampoo just as often.  He needs twice daily ear drops.  He will be taking antibiotic AND anti-fungal medications.  I’m guessing that Cooper and I are going to become very close over the next few weeks.  I’m hoping that his one flaw is cleared up and he will become the BEST DOG EVER one again!!

Until then, I shall be  bathing the dog every three days and hoping he doesn’t attempt to drown me in the process.