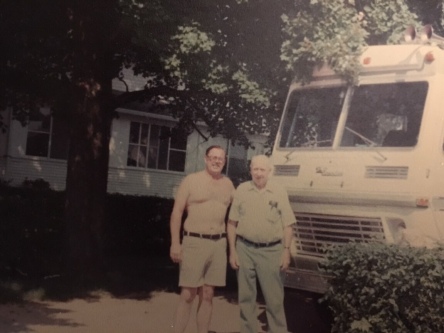 My grandfather had this giant motorhome he would park right in his driveway. This thing was legit seeming like it was a hundred feet long! It slept quite a few of us when we all trekked to Florida one year. All told, there were 4 adults and about 6 kids ranging in age from one to about fifteen, I think. This motorhome had a name…Edgar.

I never thought to ask how Edgar got his name. Ojo family…chime in here if you know. Everyone knows who he is. As a matter of fact, I texted my aunt to see if she had any pictures of Edgar. And there was no Edgar who? She just said sure thing and sent one along.

I have exactly two memories of Edgar and Grandpa that are as vivid as can be. One was of that looooong drive to Florida with a screaming one year old in the back. Thank you, Danny. Grandpa and my dad were supposed to be splitting the driving. My grandma sat in the navigator’s seat the entire time dozing off every now and then. My dad would drive his shift in its entirety then wake up Grandpa for his turn. It seemed like Dad had just closed his eyes when it was his turn again. Apparently Grandpa had been shaving a few ours off his shift all through the trip.

The other was a quieter, more personal memory. It was when Edgar was parked in Grandpa’s driveway rather than his second home which I believe was in someone else’s drive just a few houses north. Grandpa liked to sit out in Edgar to smoke a few cigarettes. If I was lucky, I got to hang out with him in that giant beast. We would play cards and listen to the radio. It was an old wood-grained radio that had seen better days but still got the job done. He liked talk radio which I found SO boring. But it was just the two of us so I was as happy as can be. He would sneak me my very own can of 7-Up and oranges slices–those jelly candies that would get caught in your teeth. Sometimes he had jelly spearmint leaves if you were lucky. I felt so grown up getting to spend time with him without siblings or cousins filling the space between us.

How is it that he’s been gone 20 years today? It seems impossible. His larger than life personality and no nonsense lessons are as alive in my memory as they ever were. Case in point, you never lend out money you couldn’t afford to not get back. But you always made people sign a contract for repayment to show the importance of responsibility. It didn’t matter if it was $1000 or $10…present the contract.

I wish I could remember the sound of his voice or the smell of his cologne. I wish he had been with us longer but he was always meant to be with his bride. His departure was a surprise to no one after she left before him. Time fades what memories we have left but there’s no doubt that he touched my life in ways that I didn’t take note of until I was much older. I appreciate that now almost as much as I miss him.

I am writing for the Two Writing Teachers March Writing Challenge

Join 85 other followers
Follow Karyn In The Kitchen on WordPress.com